You are here: Home » Facts & Figures

Inverter OR Genset that's the question 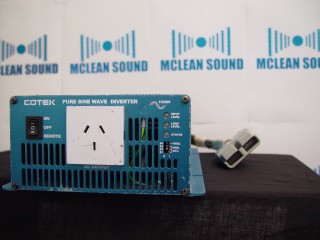 Fantastic items , 20 years ago they did not exist, the ability to provide 240V power in remote locations from a battery. An ( UPS )Uninterrupted Power Supply  is the same thing but is connected to mains power and can change over from supplying power from the grid to power from the battery preventing gear shutting down during blackouts .

A great combination so long as the limitations are understood. Silent and smell free inverters can be used to power normal mains powered equipment ( powered speakers, mixers, stage gear, keyboards etc ) in off the grid situations, weddings in the parks are a good example or in mobile situations.

The current generation of battery powered ( Integrated )sound equipment (meeting amps etc) have limited capability & performance or if client already own a P.A system using an inverter & battery is a great solution.

Now the down side

How big is the battery ??

Battery's are rated in A/Hr , that's Amps per Hour , in the above a 100 A/Hr battery is about the size of a car battery. What this means is you can draw 1 amp for 100 Hrs or 2 amps for 50 Hrs NOT 200 Amps for 1/2 Hrs, because battery's are chemical in nature and it takes time to convert from chemical to available electricity. Its also affected by temperature slower when cold , cars battery fails on the first cold day of winter. Newer battery technology is improving Lithium ion battery's weigh half of the equivalent capacity ( energy density ) of lead acid types but cost 5 times as much to purchase.

The above example of the wedding is practical and we do them all the time , 1000 W P.A idling along for an hour or so with vocals , keys & acoustic guitar perfect . Use a 1000 W inverter & 2 x100 A/Hr battery's , one should do the gig and one spare cause when the inverter go'es beep beep that's the end of the show . Mobile applications , 2000 W Sub / sat system in the back of a ute for playback in a parade , use a 2500 W inverter & 2 x 200 A/Hr battery's in parallel, bass uses lots of power. More than 2000 W  use multiple inverters and battery's ,break up the load & start thinking seriously about a 4KVA genset.